No sooner had the US withdrawn from the Paris Agreement on Climate Change than that uproar was silenced by terrorist attacks, and even these news stories have been superseded by the political fallout of the general election, the Grenfell Tower fire, and so on.

On 1 June President Trump officially withdrew from the Paris Agreement made under the United Nations Framework Convention on Climate Change, rescinding America's commitment made under Obama (pictured below). In under half an hour the reasons he gave boiled down to protecting the US economy and taxpayer, though not because he thinks it is not happening, or is not the result of human activity.

As a charity seeking to promote safety, health and environmental management for the good of all we understand that our institutional arrangements, carefully built over many years, are always in danger of being undermined and even reversed. But we should also be clear about the value of these arrangements before we condemn those who put them at risk.

The Paris Agreement – like its earlier incarnation the Kyoto Protocol – is based on the principal of burden sharing, where the largest emitters of greenhouse gases would take on the largest burden to both reduce emissions and pay other countries to help sustainable development and adapt to future climate risks. Any burden-sharing is controversial, as we are seeing in the European Union over the refugee crisis. 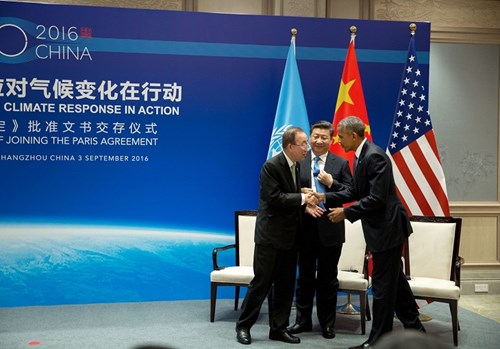 It involves a complicated calculation of historical responsibility and present production, but which means – basically – that though China emits double the greenhouse gases as the US now –though on a per capita basis the US is still far ahead – it is given more time to slow and reverse emissions. For a nationalist like Trump this is unfair and US jobs and growth must come first. Interestingly, this has also happened at a time when the renewables market is really taking off, particularly in the EU and China, but also in the US, where there were more jobs in renewable energy than in coal in 2016.

Technological development and increasing usage is driving down costs, and importantly the UN and various actions by the EU have provided a consistent framework to encourage demand for producing energy in this way. So do we need such a framework anymore? Won’t the renewables market continue to grow anyway for good economic and energy security reasons, as much as for reasons of reducing emissions?

It might be that Trump’s actions won’t make that much difference. However calculations based on self-interest are dangerous for the simple reason that greenhouse gases are emitted locally but heat globally. If all bets are off and there is a huge increase of US emissions, then the rest of the world’s sense of injustice following further climate degradation will do nothing for peace and stability.

On top of this danger, there is the value such multilateral agreements contain in providing leadership and goodwill for making difficult adjustments to achieve sustainable economies; adjustments that are best done in collaboration. Thinking only of your own present without giving due regard to the past or how to set a path to a sustainable future, will ultimately lose friends, injure more workers, poison our rivers, melt our icebergs and turn fields into deserts.

The Building Safety Bill includes much to be welcomed and could be the way to ensure that a tragedy like Grenfell and the cladding and fire safety defect scandal never happen again.

I recently returned to Twitter after a long break. The atmosphere felt grimmer. The interaction angrier. Previously active colleagues were missing.

The impact of long Covid on a person’s life can be devastating.