It has been claimed that some extremely well known people in history regularly used sit to stand or standing desks; from Leonardo Da Vinci to Napoleon to Churchill.

You cannot spend much time on an office furniture supplier website before being offered deals on and the benefits of sit/stand desks.

Furthermore, I can confidently say that one of the most asked questions while conducting workstation risk assessments in recent years is: are these standing desks any good?; or in some cases people tell me: I only requested to speak to you so you could recommend a standing desk for me. So, should I be recommending sit/stand desks, and should you or your employees be using them?

Before going any further, there won’t be a simple answer to this question. As when it comes to human health, especially across a large population of people such as office workers, there are no simple answers. 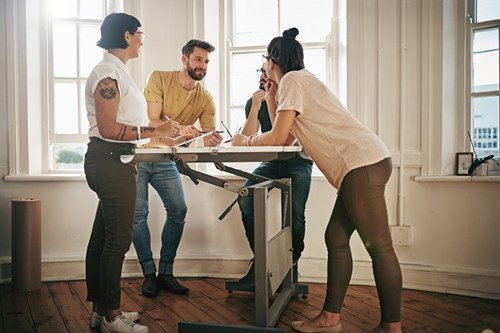 What problem, what solution?

The first thing to consider would be why are sit/stand desks considered to be a solution, and to what problem. The increase in sedentary behaviour in the working population – low energy behaviour in a sitting, reclining or lying posture – is one major concern for the health of the working population. For example, an increase of 10% in the proportion of USA workers in a sedentary job was found from 1960 to 2010, according to research published in 2011.

Furthermore, using objective measures (e.g. accelerometers), studies have found that in adult populations the average time spent doing sedentary behaviour ranged from 7.7 to 9.6 hours during working days, with some researchers stating that 65% of this time was during work time.

A recent paper titled “Differences by age and gender in the sedentary time of adults in Scotland” was published in the Journal of Sports Sciences at the begining of this year. In summary, one of the key messages of the paper is that middle aged adults who are in work are sitting comparable amounts of time to older aged adults. This was found due to the fact that time spent sitting while at work had not been included in the national prevalence estimates, which challenges the traditional understanding that the older population in Scotland spends the most time sitting. These increases found in sedentary behaviours have been linked to increases in poor musculoskeletal health in the working population and other health issues. Therefore, the argument exists that, if sedentary behaviour in the workforce is reduced, we may see an improvement in musculoskeletal health.

Much research has been conducted looking into whether the use of sit/stand desks for work does in fact reduce time spent being sedentary. In one of this kind of study published in 2012 titled “Reducing Occupational Sitting Time and Improving Worker Health: The Take-a-Stand Project”, the researchers introduced sit/stand desks to a selection of workers and used objective measures to record time spent sitting. The American authors reported a 224% decrease in time spent sitting while the workers had the sit/stand desk. They also recorded that a 54% decrease in complaints of upper back and neck discomfort was reported during this time. Furthermore, these benefits were reported to have almost completely reverted themselves back to the pre-study state once the sit/stand desks were removed.

If we were to stop there and just take these findings to be facts, we could conclude that sit/stand desks are great and will solve all of our problems. However, it is very poor practice to just take one paper that confirms what you want to hear and move on.

This is where a good quality review of the literature can really help us understand an issue like this. One such example from the Cochrane Library of Systematic Reviews reviewed the literature for workplace interventions for reducing sitting at work. Regarding sit/stand desks as a workplace intervention, this review concluded that while there is some low-quality evidence that use of sit/stand desks may successfully reduce time spent sitting, the evidence is unclear regarding any substantial benefit for work performance, musculoskeletal health or sick leave reduction.

The review also concluded with a discussion on the clear need for further research to be conducted to provide stronger evidence. The authors discussed the need for a systematic review of the qualitative research design literature. Furthermore, they specified the need for cluster-randomised controlled trials to be conducted.

Returning to our initial question. Yes, it may be the case that sit/stand desks can reduce time spent in sedentary work in some situations. However, it is much less clear whether decreasing time spent sitting this way improves the musculoskeletal health of the workforce.

While the benefits of sit/stand desks may be exaggerated or oversold, the health impact of increasing sedentary behaviour is very real.

One common discussion I regularly have with a worker during a workstation risk assessment is about how regularly they take breaks from their workstation, and whether they work during their lunch break. If we look at the risks associated with working with computers, in particular the posture-related risks; there are two key elements to consider. We want to make sure that the equipment being used is appropriate and is set up to support the user in adopting as ‘good’ a posture as possible.

However, regardless of how ‘good’ the posture is, sitting in that static posture all day will still expose the worker to the risks associated with sedentary behaviour. We need to consider the behavioural aspects of working with computers too. I always recommend that a worker should not work during their lunch break, take a short walk where possible, and ideally not eat their lunch at their workstation.

I will then recommend that the worker should avoid working at the workstation for an extended period without taking a short break. This point will often lead to a raised eyebrow or two, and a thought bubble above their head saying, ‘I don’t have time for that, I’m much too busy!’

I would consider an extended period to be one hour. So, I recommend to the worker that they should take a short break from the workstation at least once an hour. The break is not a five-minute break, where a lot of time would be lost over the working day; it doesn’t even need to be a minute or 30 seconds. This can be a momentary break from the task, a moment to stand up, have a stretch and sit back down again.

In cases where the worker is suffering with some musculoskeletal pain or discomfort the frequency of these small breaks could increase to every 30-40 minutes to help reduce the time spent working in a single static posture. Furthermore, there are many other helpful behaviours such as using stairs rather than lifts or escalators, or walking to talk to a colleague in an office opposed to always emailing, or perhaps conducting standing meetings where appropriate.

However, these recommendations are not just based on my opinion. The L26 Display Screen Equipment Work Guidance on Regulations document provides guidance on the 1992 Health and Safety Regulations. It states the following: “Where the job unavoidably contains spells of intensive display screen work (whether using the keyboard or input device, reading the screen, or a mixture of the two), these should be broken up by periods of non-intensive, non-display screen work.

Where work cannot be so organised, e.g. in jobs requiring only data or text entry requiring sustained attention and concentration, deliberate breaks or pauses must be introduced.” It also states that “breaks should be taken before the onset of fatigue, not in order to recuperate and when performance is at a maximum, before productivity reduces. The timing of the break is more important than its length”.

For further information on this point a useful frequently asked question article can be found on the HSE website titled ‘Should VDU users be given breaks?’

So the big question in my mind when considering recommending a sit/stand desk is whether it can achieve much more than adopting those behaviours described above. At the time of writing I am not convinced that the sit/stand desk is something that we should all have, but it can be useful to some people to allow changes in posture during the working day. The combination of an appropriately-configured seated workstation, and the adoption of changes in activity such as walking around the office and taking screen breaks and longer breaks when relevant, may be just as effective. There is rarely a simple solution where one size fits all.

HSE on musculoskeletal disorders at: hse.gov.uk/msd

More info about breaks at: hse.gov.uk/contact/faqs/vdubreaks.htm