Kieren has been familiar with the world of construction since the age of 16, when he started a summer job on a building site. This was 14 years ago. He has been working as a site supervisor for Walker Construction for three years now. With a head office in Folkestone, Kent, the company delivers specialist construction services for the building, civil engineering, leisure, road and rail industries, to both the private and public sectors. Walker Construction has 250 employees and a turnover of £35 million.

“As site supervisor I organise and monitor subcontractors on site and ensure a safe working environment throughout the day for them and the public,” explains Kieren McCafferty (pictured). “We subcontract specialist skills in plumbing, electrical services, suspended ceilings and bricklayers. Each of these professions come with specific risks.” 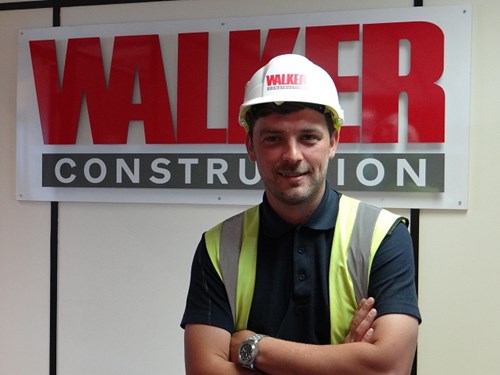 “It wasn’t until I joined Walkers that I received the comprehensive job training, which included health and safety. This opened my eyes to a lot of things; it made me see the dangers of our job and their consequences clearly. Having spent over 14 years in construction, I’ve seen some awful accidents. I don’t want to see friends or work colleagues getting hurt.”

Kieren’s health and safety work with the pupils of White Cliffs Primary College (see photo below) helped him to win the ISA 2017 Health & Safety Champion title.

“At the White Cliffs Primary College, we were building a two-storey extension to the existing school building. I have been involved in it from the start, including digging the foundations, a short distance from the white cliffs of Dover. As we erected the fencing for the site, the children became very interested in the building site and some started poking the fencing.

“We realised that we needed to talk to them about the risks of the construction site and what’s going on behind that fence. At a school assembly, we talked about the dangers of going near the fence and putting arms through it. I said: ‘Try and stay away from the fence. If you see big machinery, do not approach it. Don’t climb or find a gap in the fence because it can end badly.”

“When we did the foundations of the building, which was a massive concrete slab, we came up with the idea of painting a mural on it. We made a safe exit for the children to come out, barriered it all off and let the kids paint on it. Each class did a section of the painting. Afterwards, we built on top of that, so the murals will always be there.

“We followed this up with a poster competition about safety on construction sites, which was included in the school newsletter. I picked the top three winners, who received large Easter eggs and toys.

“I think this campaign really worked. Afterwards, every day when we walked past the children, they greeted us: ‘Hi Bob! (from Bob the Builder). We won’t touch the fence, Bob.’  So, that was quite amusing…but I think the message stuck." 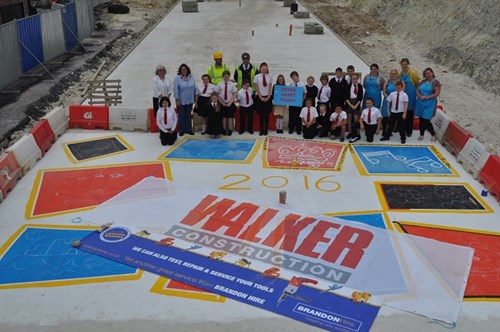 How do you communicate with the contractors

“Walker Construction introduced a questionnaire called Safety Behavioural Scheme, which every member of staff and subcontractors have to complete. It is to alert people of a variety of risks and dangers they face every day on a construction site. This gave me the idea of introducing a weekly ‘safety tour’ for all subcontractors. I would ask a worker from each subcontractor to walk with me around the site and pick one thing that they think is unsafe, not good practice or good practice. I would write them down on a board and ask them to prioritise them in order of urgency of addressing them. The very urgent issues would be coded red and they would get done the same day. If they were blue or green, they would have to be fixed within a week.

“We started this process off with labourers and then moved on to their supervisors, and finally their bosses. It opened their eyes to many dangers. It also built trust among us, as afterwards, they would come to me and say: ‘this isn’t safe, this needs fixing…’ The company was very pleased with this process and David Marshall, from the Walker safety team, introduced an action board, similar to mine, featuring various hazards and actions that need to be taken. This programme is now integrated into safety procedures on all of Walker Construction’s sites.

“I think that this approach is changing their mindset. It places the initiative in their hands. Subcontractors, particularly those who spent many years in the trade, are resistant to change.”

I am told that you have also ‘revolutionised’ toolbox talks at Walker Construction, making them much more interactive and engaging...

“Many workers have to participate in toolbox talks at which various pieces of information are read to them, sending them off to sleep. I thought if I wanted to get and keep their attention, I need to get them involved. For example, last week before we started work, I opened up the tool cabin and said: “I want you to go through every single step of digging. We need to dig a hole and there’s a cable in it. How do you know that the cable is there and what would you do to avoid hitting it?’ First chap says: ‘First you get a permit to dig. Right, write it on the board.  Next, another bloke said: ‘I take CAT and genny (cable avoidance tools).’ ‘Yes, go and get the CAT and genny.’ And I worked my way through it all. Then they went and did the job.

“I do the talks every one or two weeks. However, we hold them more often if particularly difficult work is coming up and we need to alert them about specific risks.

“Many younger men are very cooperative and enjoy our talks. But older men who have been in the trade for many years can be stuck in their ways. For example, I recently spoke to a carpenter who had been doing his job for some 40 years. ‘I have never worn a mask,’ he told me. ‘Unfortunately, you’d have to do this here, I said. You will also have to use dust suppression on your saw.’ I printed for him information about the harmful effect of wood dust that may cause cancer. He was reluctant to take it but then he came back and thanked me for this information. He wouldn’t have done that in front of the younger guys.”

“I do inductions for every contractor; for one company, I conducted 52 of them. I give the workers general information about their working environment, risks, hazards and who the first aiders are.”

What are your professional plans

“I’d like to go down the health and safety route. It gives me a lot of satisfaction to know that although we are working in a very dangerous environment, where anything could go wrong and does go wrong, I am making a difference by helping my colleagues get home safely to their families every night.

“Now, I’m doing my NVQ level six in construction management, which I hope to complete in six months’ time. I would like to become a health and safety manager in the construction industry, preferably in this company. Fingers crossed.”

The risky business of construction

Dave Marshall, health and safety manager at Walker Construction, explains: “Walker faces similar challenges to other construction companies, such as working at heights or dealing with buried services. However, finding specialist skills for certain trades also proves a challenge. The company has made its own training more robust than the average in this sector, and we made our equipment more secure.

“Vibration is a significant hazard in this industry. The company has been trying Havwear monitors that look like wrist watches, assessing hand and arm vibration risks. They allowed us to get accurate readings of vibrations to which the workers are subjected during the day. We monitor vibration levels anyway, but this initiative, once implemented, will take the issue to another level.

“Another source of hazards is dust and silica. To mitigate them we introduced cartridge masks, which, unlike disposable masks, have two filters and are more robust, so they need to be individually fitted.

“Moreover, people in the industry are becoming more aware of mental health issues. It is a very masculine business and, in general, men are reluctant to come forward with any personal issues. However, I think this is changing as more people approach the HR department and ask for assistance with issues that are troubling them. In summer, a mental health specialist will be visiting all our sites and raising awareness of mental health. We are taking this issue very seriously.

“Our 40 safety champions are also looking into different ways of improving communications with all employees. We are now testing a text service, which we will use to communicate good practices and even such things as weather alerts, so if storms are predicted, arrangements can be made on site to strengthen barriers etc. We work closely with our partners in the construction industry to share information and good practice that benefits all of our employees.”

Preview of COP26 and what it means for employers

Body worn cameras can reduce the risk of workers suffering violence and aggression from members of the public, making them an ideal protective tool in environments such as retail and healthcare.

After winning a string of awards from the British Safety Council in 2020, FCC Environment decided the time was ripe to enter the Five Star Audit, determined that the coronavirus pandemic would not stop progress.

Preview of COP26 and what it means for employers

The decisions made by the international community at the COP26 climate change summit in Glasgow will eventually affect every business regardless of its size and location.