“Photography is the story I fail to put into words,” said photographer, Destin Sparks. Indeed, truth telling, or preserving forever a moment in time are some of the advantages of photography as art form. Not merely a document of what has happened, it allows the viewer to discern and think about what they are seeing.

When trade union and personal injury law firm, Thompsons Solicitors, launched its ‘Focus: on safety at work’ photography competition, it called for images that might capture the meaning and priorities of health and safety today. Launched on 28 April for International Workers’ Memorial Day, entrants were asked to submit photos along specific themes. These included: what health and safety means to me, why health and safety is important and why I think health and safety should be protected. As the competition drew to a close and the winners were selected (pictured), we spoke to Tom Jones, head of policy at Thompsons, to discover more.

Firstly, we wanted to find out, why did the firm decide to run the competition? Of course, getting people interested and engaged in health and safety is a good thing, but the criteria seemed to hint at a deeper, more pressing objective. “I think we’re almost in the perfect storm, in a way, on health and safety,” says Tom. “There’s always been a sort of geek element associated with health and safety and people are easy to dismiss it, the old ‘elf and safety’ jokes about it. With the Tory government coming into power in 2010 and setting up the red tape challenge, with Brexit looming, combine that with a sort of a general attitude that we don’t have the industrial plants we had in the past, [the view is] the injuries must be coming down, when in fact we see week in, week out, people injured and families devastated by accidents that could frankly have been avoided. So, for us, the motivation was to highlight that health and safety is as important now as it ever was.” 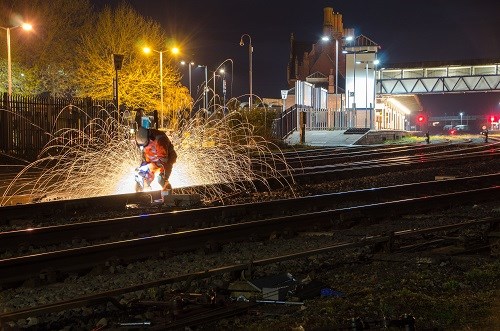 Christopher Draper, RMT member from Herefordshire, won first place for his shot of a track worker.

Photographers were also asked to respond to the theme: why health and safety is neither a burden, nor ‘red tape’. The Grenfell tragedy on 14 June has given regulation attention – at a debate at the House of Lords on 13 July, it was heard how so-called ‘red tape’ has in fact “kept greed and exploitation in check since the beginnings of the Industrial Revolution’ and ensured homes and workplaces are safe.”

But the competition was launched before the tragedy happened. What inspired Thompsons to focus on red tape? When the Great Repeal bill was announced on 21 June there was initial outcry that regulations were vulnerable to stripping out. That has died down for now, but Tom is still very much worried about what Brexit will do to our workplace standards: “There is a real risk that those who would dismiss anything that is there to protect workers, that is set out on the ability of business to thrive and survive, will get an upper hand as Brexit goes through.”

This will be more apparent during the negotiations that focus on business, not rights, he says: “I can well see big business, those who believe in a shrunken state and totally free markets, turning round and saying, ‘well look, this is holding us back; get rid of this and we’ll be alright, we’ll be able to push forward and get into new markets or reduce our price or whatever it may be’. And there is a cost to that in terms of individuals’ health and safety.”

Grenfell and the future

Even with the tragedy of Grenfell, he does not hold out much hope that this will be the turning point: “Already you’re seeing Grenfell being explained in ways that tries not to present it as a regulatory failure but due to other factors,” he says. He thinks the debate on cladding, for example, has moved to talking about how removing cladding also creates a risk: “There will be a lot of forces worried that it will cost more in the future to put up buildings, or that it’ll put extra burden on local authorities, and the national government is not prepared to pick up those bills. I would like to think there will be a positive outcome [out of the inquiry]. There should be for the sake of those who so tragically died, but already you can see people taking positions.”

All of which brings us to the photography competition – which, when we spoke had over 40 entries yet to be judged. What is Tom hoping to see? Thompsons, as a firm, has a long history in health and safety, being established in 1921; winning the first industrial diseases case in 1956 and the first case for asbestos- related disease in 1972.

Risks today may not be about ‘getting industrial fingers chopped off’ as much as the past, Tom says, but risks are all around us. “We will act for people who have been exposed to asbestos in schools, or who are working in seemingly safe environments, which people wouldn’t consider risky, but end up with severe injuries because management has just simply not taken notice of people’s complaints. Whether that is a broken chair, which gives somebody a severe back injury, or whether that is somebody working in moving traffic and the markings are gone.” What is frustrating he says is that “if one person had just listened, or had just looked, then the injuries or deaths would have been avoided.”

In the winning entries, it is observation of such everyday dangers that have been captured. Phil Morcom, a UNISON member from Yorkshire, who came third for his photo of needles strewn about in bags in a recycling facility, [pictured below] comments: “Every month workers sorting recycling waste see used needles and other sharps appearing in the waste they sort. Protective gloves and keen eyes help reduce the risk of a needle stick injury, but reducing the amount of needles wrongly disposed of in recycling waste remains crucial for these workers.” 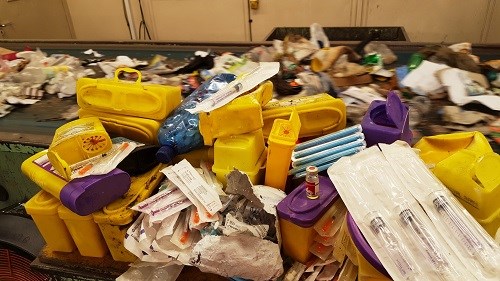 The photo gets to the heart of what Tom says is the problem of health and safety seen as ‘someone else’s job’: “I think there’s a sort of an ennui about it; that health and safety is out there somewhere, somebody else is sorting it and it’s going to be fine.” The competition was about getting people to notice such risks and document the evidence.

But what about the power of the medium chosen for the competition? A photo can show what has happened or is about to happen and it can be shocking in that way because there is a sense of powerlessness and yet it is irrefutable evidence of a failure somewhere along the line. Is photography valuable for health and safety campaigns, therefore, we ask Tom?

“As a personal injury lawyer, I will see photographs immediately after an accident where you will think, oh bloody hell. It’s shocking and you can see how something’s gone wrong. A photograph can make you stop and think.”

Equally, they can help us appreciate the enormous risks of peoples’ jobs in a straightforward depiction, such as the winning entry of a track worker, the sparks flying like fireworks. “Photos can make you think about what somebody’s job entails that makes you realise the risk. And you only need to walk down the street and you see people grinding up paving stones or whatever with no eye masks on, or they’re drilling without ear defenders, and they are immediate visual things that make you think ‘I hope you’re going to be alright’.” 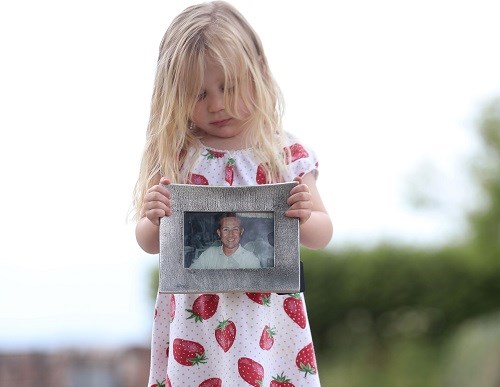 We’ve discussed health and safety and its current challenges, but the biggest one that Tom sees is stress. ‘‘Stress is the biggest workplace issue in the UK and yet legally that is something that is hugely difficult to pursue. The cases aren’t in favour of the injured.” So much so, he says lawyers will often not take up cases where the injured party says stress was a factor in their accident.

Indeed, in many of the cases that come to court for sentencing, few include information on if the worker suffered stress before the incident. It is a complicated area as the lines of where stress starts and ends, whether in the workplace or at home, are hard to draw as are the responsibilities of the employer. But in Tom’s view, it is straightforwardly about managing stress as part of health and safety: “Health and safety, proper health and safety structures, standards, risk assessment in advance can avoid people being put into situations.”

Stress, red tape, complacency – the biggest issues of today –, interestingly are all intangible things. It’s impossible to take a photograph of any of these directly. Perhaps this is the point. Risks, whether they are damaged asbestos in schools, or a broken chair, are in the small details that can end in devastating consequences. Small risks, individually taken, can also become big failings that emerge only when it’s too late. The competition is an excellent reminder for us all to keep our eyes open and our minds questioning of what we see around us.

Photographs from ‘Focus: on safety at work’ can be seen in a free exhibition at the People’s History Museum in Manchester until 4 September. More information here