ByBox is a supply chain technology specialist operating in logistics and technical services markets. Through its coding and technological capabilities, the company provides its customers with a wide range of supply chain solutions, including smart boxes, which help companies deliver parts to engineers so they can complete critical jobs efficiently. ByBox technicians also offer the company’s customers a flexible and cost-effective support service.

The company’s services and technologies are used by over 400 businesses in the UK, as well as in Benelux, USA, Israel, South Africa and New Zealand, operating across the reprographics, IT channel, retail, energy, utilities, telecoms and facilities management industries. Founded in 2000 in Silicon Valley, the company employs 400 people and its annual revenue is £73 million. ByBox’s headquarters are in Harwell, Didcot, Oxfordshire, while its main distribution hub is located in Coventry. It is supported by seven regional distribution centres across the UK.

ByBox has received numerous accolades, including listings on the Sunday Times International Track 200, Sunday Times Tech Track 100 and Deloitte Fast50 business, thanks to its focus on removing cost from supply chains.

Roger Ward explains: “ByBox provides a technology-enabled locker-based solution to help its customers move their goods around the country. The company’s branded software, Thinventory, connects our network of smart boxes in 900 locations around the UK. Smart boxes are usually situated within three miles of an engineer’s home or workplace. Deliveries are made overnight and are ready for collection before 8am.

“Accessible via a unique pin number or a swipe card, iBoxes have different door sizes to accommodate a variety of items. The items delivered to an iBox are tracked at all stages of the supply chain. Doors are rented on a transactional basis, so the boxes are a good storage solution if customers don’t need to use them every day. Moreover, iBoxes can be allocated to a job location, so engineers can pick up their parts from the box closest to the job rather than from a lock box based near their home.

“Lock boxes have larger door sizes to accommodate bigger items and are accessed via a key. The items delivered to a lock box are tracked until they are placed into the locker. They are rented by door, so an engineer will have their own door with a key. Lock boxes can also be used as a storage point until the parts are required. As well as smart boxes, the company offers the services of a team of technical couriers who maintain and repair equipment, such as EPOS, in the field.” 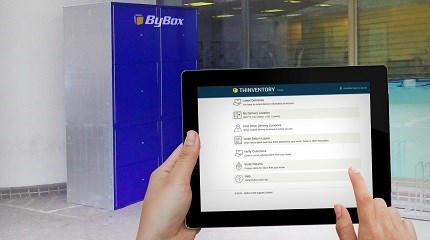 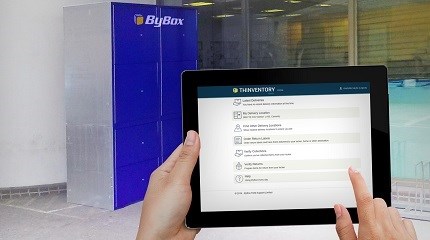 “The Coventry warehouse and distribution centre consists of loading bays, pallet storage racking and a mezzanine floor area with a parcel storage facility. The main health and safety risks are related to potential collisions with the vehicles and goods moving in and out of the warehouses. Originally, the site was a pre-war munitions factory and although it looks modern from the outside, it presents the usual challenges that you would expect of an old building.

“The controlled movement of forklift trucks and road vehicles within the warehouse and distribution centre, including outside areas, is of paramount importance to reducing the risk of injury from collision and crush injuries. We have introduced a number of control measures to prevent this, including demarcated and barrier-protected pedestrian routes, trained forklift truck operators, a 5mph site speed limit, forklift truck flashing beacons and the mandatory use of high visibility vests fastened at the front and safety footwear.

“The picking operations are carried out while customer goods are packaged at workstations to be ready for dispatch. Therefore, manual handling is our second biggest risk. We handle anything from an envelope to items up to 25kg and over.

“We also use third party contractors to make overnight deliveries so another set of risks is related to road traffic. We ensure that our courier services are aware of issues such as fatigue on a night shift.”

Journey to a Sword of Honour

In 2013, ByBox conducted an internal Safety Climate Survey of the entire workforce. “It confirmed that in terms of safety culture, we were just about ‘managing’ and that a greater level of engagement was required among all levels of staff. The recommendations from the survey included regular safety tours, greater near-miss reporting, more effective sharing of safety information and a review of safety performance objectives in personal appraisals.

“Early in 2014, we realised we had reached a plateau with our accident statistics. They were low but we knew they could be improved. We struggled to some extent to get near misses reported, ensure that everyone completed safety tours and we ‘dabbled’ in safety behaviour management. The provision of occupational health had fluctuated over the years and the company struggled to sustain health and wellbeing initiatives. We have been accredited with OHSAS 18001 since 2011 and I knew that the company was better than ‘just compliant’. However, we needed a catalyst to raise our standards and demonstrate that we can achieve industry ‘best practice’. We are regularly audited by customers. So to demonstrate that we can go beyond compliance and deliver best practice was a message we needed.

“ByBox has been a member of the British Safety Council since 2009 and although I was aware of the five-star audit, I didn’t know what it meant in practice. We asked ourselves: ‘Do we need external intervention to realise the company’s full potential in health and safety management?’ I also asked myself: ‘If the answer to that question was yes, how would I educate the business about the benefits of adopting this process in addition to maintaining the British Standard OHAS 18001?’

“Achieving a five-star standard would require a substantial investment of time, money and resources. We also needed to inspire our managing director into believing this was the right direction to go. I knew an example of a Sword of Honour winner that would stir his passion.

“In February 2014, we set off for a benchmarking visit to Aston Martin [car manufacturer]. At the time, Aston Martin was the recipient of three swords and a showcase in health and safety excellence. After the tour of their factory, our managing director set us a challenge: ‘We want to be awarded the British Safety Council Sword of Honour!’ He didn’t realise that we would first need to undertake a five-star audit!

“In June 2014, I attended a British Safety Council workshop on the audit process. Here I learned two things. First, there is a difference between OHSAS 18001 and the five-star audit – the first is a measure of compliance while the latter is the industry’s best practice standard. The second lesson was that OHSAS18001 is roughly equivalent to three stars. I was told by organisations who were accredited with OHSAS 18001 that it had taken them three years to obtain five stars, let alone get the sword!”

The company’s sword journey, began with the research into the requirements of a five-star audit. “At the time, the audit had five sections (Policy and organisation, strategy and planning, implementation and operation, performance measurement and evaluation and review) divided into 65 elements. Some of them are considered to be ‘core’ to a particular section, while others are applicable within more than one section, i.e. manual handling, traffic management and documentation management. Two safety management indicators, leadership and continual improvement, evaluated both as part of these elements and also within their own right.

“I spent a great deal of time going through the entire audit schedule, checking every element to see where we met the standard and where we needed to improve.”

The five-star audit was scheduled for May 2015. The process lasted three days and included interviews with both company management and staff.

Roger stresses: “It’s imperative to secure the support of top management when undertaking the audit to demonstrate that there is full commitment to the process from the top. The preparations are also vital: you cannot have a quick sweep around and hope that it all goes okay, because it won’t!”

The first audit meeting was attended by the ByBox managing director, who also gave the auditor an opportunity to interview him. “We began with a short presentation welcoming the auditor, giving him an overview of the actions taken following our last pre-audit in February 2015 and demonstrating our focus on continual improvement. Throughout the three days, the auditor continued interviewing the management and staff. This kept us on our toes as it was indicative of whether the policies and procedures were understood and effectively used by everybody and whether the message was consistent across all departments and levels.

“On the final day, the auditor gave an overview of his findings. Our managing director drove up from London to attend the meeting. This again demonstrated our trust in the audit system and its value to the company. The feedback given at the time of the audit was pleasing, with the attitudes, commitment and involvement of senior management being evident and health and safety being regarded as a top priority at the site. It was clear that the company was focused on improving its performance standards. However, we also had some work to do with our procurement procedure, setting personal objectives and introducing behavioural safety initiatives into the organisation’s health and safety programme.

“When we received the result of our audit, we were astonished with the result: we had achieved five stars at very first attempt. The next question was: how to get the sword? There was a genuine sense of excitement throughout the entire workforce; the sword was a tangible symbol of their hard work and commitment to health and safety.

“The invitation from the British Safety Council to apply for the Sword of Honour came within days of us being awarded five stars. The application process gave us an opportunity to answer some searching strategic questions with regard to our audit results. We made full use of this process, gaining an understanding of how we could use the results to improve health and safety within the business.

“Then the day of the results announcement came. It brought fantastic news for ByBox: the company had been awarded a Sword of Honour at the first attempt, within 18 months of starting this fabulous journey. I have never announced anything that has received such a spontaneous round of applause. The sense of achievement in the company was tremendous.

“With immense pride, I collected the Sword of Honour on behalf of ByBox at Drapers’ Hall in London on 27 November 2015. It’s difficult to describe how it feels to be one of 61 organisations worldwide to receive this award and be recognised as one of the ‘best of the best’ in health and safety. When I returned to Coventry with the sword, I took it around the entire site, making sure everyone could see and touch it. This was their achievement.”

In October 2016, the company received the news that it has been awarded the second Sword of Honour. Roger Ward commented: “The Sword of Honour is a worldwide achievement and to have won the award for the second year in a row gives us a tremendous sense of accomplishment.

“Best practise in health and safety has been and will always remain a focus of ByBox’s activities. This recognition is testament to the efforts which our employees put into maintaining such high levels of health and safety at work.” 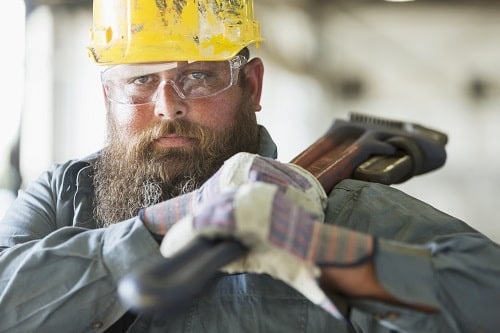 By Belinda Liversedge on 26 February 2020

Teaching stress management to an all-male audience of haulage and logistics workers can be a tough gig.

Construction sites can be dangerous places, especially for those without health and safety training. 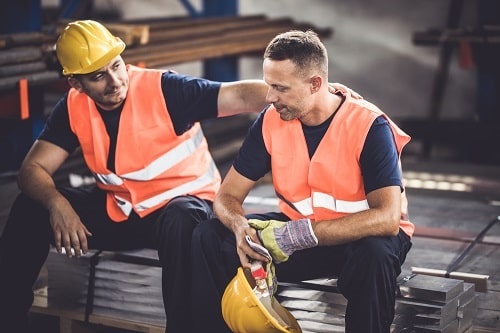 When Mates in Mind was founded in 2016, it was evident that the workers in the construction industry were experiencing a greater-than-usual risk of suicide, while stress and depression were cited as some of the causes.