Coach may be a traditional form of transport, a way of getting reliably from A to B, yet the industry is characterised by a very modern risk – 24 hour working. “Nothing is more important than safety at National Express and the wheels never stop turning,” says Craig. “If you look at our safety profile, in common with every other transport operator, the biggest risk is vehicle collisions because we have 560 coaches on the road, wheels are turning 24 hours a day, seven days a week, 365 days a year.” Vehicles get serviced every 21 days to keep them roadworthy. But the sheer amount of time coaches are in operation increases the risk by laws of probability: “[Collisions] are inevitable because it is an inherent risk of what we do.”

These are generally limited to minor incidents, “the majority are wing mirror strikes, low speed collisions while reversing”. Nevertheless, the threat of serious collision is never off the radar and National Express have made it a priority to reduce all collisions by 50% over five years. Currently, in year four, Craig says they are “on track”. “We are trying to do things a bit smarter, a bit better, but safety never stands still and so there’s always more we can do and that is what we are always looking at”.

One recent innovation is introduction of safety technology, known as Lytx DriveCam. Over last year, National Express fitted every coach in its UK fleet with the two-way camera. With one camera on the driver and one on the road, it captures 12 seconds of video (eight seconds before and four seconds after the event) and is triggered whenever there is an unusual movement. “Its deployment helps us capture and records our near misses, so the driver and his manager are aware and can learn from them,” says Craig. An alert from the camera may lead to training for the driver, or help to address the underlying issues.

National Express is vigilant about managing the risks associated with fatigue. Craig says: “We’ve done a lot of work on it over the years”. Most recently, they have written a new booklet on managing fatigue, which has been given to every driver on the network. “It explains what fatigue is, why it happens, what to do if you feel tired, what you can do to prevent it because it is all about lifestyle and diet”. But he emphasises it’s not just about handing out information. This year, the company will offer training in fatigue management so managers can spot the danger signs as well. “It is not about waiting till it happens, it is about prevention through positive action, such as education, as well as stringent rota management tailored to individual needs,” he explains.

Craig joined the company five years ago after several years with the West Midlands Police as senior safety advisor. Being exposed to life and death on a daily basis, while accompanying police to murder scenes, firing ranges, or domestic abuse cases, has given him a keen sense of what safety is designed to do – protect people. “At National Express Coach there are two and a half thousand so you think on that scale it is a much smaller operation [than the police force] but, we are looking after the safety of millions of people every month,” is how he describes his responsibilities.

It follows that to a great degree, recent changes in safety culture at National Express are down to his pragmatic and hands on approach. “I have built a reputation on making safety simple and good safety is about looking after people and coming up with ways to do things safely, not putting barriers in the way. We have broken things down to educate and engage with the workforce, giving people the enthusiasm and confidence to make a difference in their areas of responsibility,” he says.

This includes taking away some of the ‘safety jargon’ and replacing it with simpler language. He “very rarely speaks legislation”: “I am not going to sit with somebody and say section three of such and such act because you can just see…they are not with it.” One new initiative has been introducing what he calls the ‘what’s dodgy’ risk assessment. “People get it and say, yes I will tell you what’s dodgy: every time I move from the chair here I hit my shoulder, so it is a bit dodgy...and so that is the approach to safety we have.”

Change has also involved breaking down some of the corporate approaches to safety, a by-product perhaps of the large status of the company itself. National Express Coach is the sub-group of National Express Group plc. The parent firm is listed on the stock exchange and has bus, rail and coach operations across the world including Canada, Spain, Morocco, Bahrain and Germany. In the United States, National Express runs a number of school buses – the yellow buses seen in many films and TV shows.

Safety, with its implications for brand reputation, was usually discussed in the boardroom. Craig changed the approach with his belief that: “Safety management is concerned with influencing human behaviour, and with limiting the opportunities for mistakes to be made that could result in loss or harm. It’s all about enthusing people and empowering them to make a difference in their own areas”.

He believes that local managers and their staff are best placed to know what improvements are required to improve safety management in the work they do. Under his watch all 30 plus UK sites will write their own safety plans – Craig and his safety team together with members of the senior leadership team conducting safety tours to monitor the progress of the improvement plans. 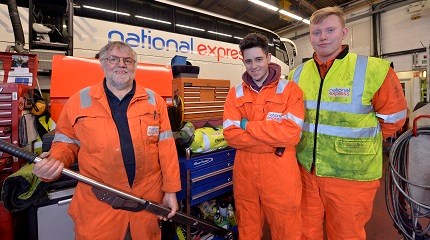 Looking to the future and the opportunities new technology brings to manage risks, things are changing. But it’s a double edged sword. Currently, new technology is a major risk factor, highlighted last year by the case of lorry driver, Tomasz Kroker who smashed into the car in front while looking at music on his phone, killing a mother and three children. “Whenever anything like that happens we send out a safety briefing, just as a reminder to reinforce the message of the dangers of driving on the road.” Drivers are not permitted to have a mobile phone in the cab: “They are not permitted to have any distraction. Whether it be an iPad, a mobile phone." There is no second chance, no yellow card, if drivers are caught on phones.

On the horizon however, technology could be used in a variety of ways. Six new double decker vehicles (pictured below) were bought last year, all fitted with conveyor belt technology for luggage. “Often when we get accidents and injuries it is because we have conscientious drivers,” he says, lifting suitcases quickly, simply trying to get passengers to their airports or other destinations on time. Craig says they are focusing on safety inbuilt into the coach design to address this. “We are looking at our next generation of coaches. We are starting to have all the safety technology built in at the design stage rather than fitting it retrospectively and putting it on after,” he says. “Drivers are more than just coach drivers, you know, they check the customers on and off the coach (preventing slips and trips), they unload luggage, and make safety and service announcements.” 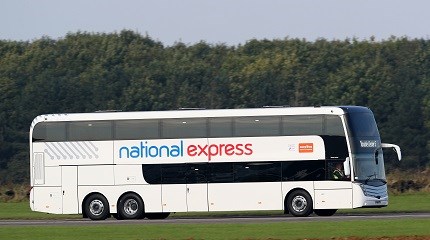 The way safety is managed at National Express UK Coach may be evolving in order to achieve constant excellence in health and safety for its drivers, employees, passengers and all others who come into contact with the business. There will always be risks to manage and risks to look out for on the roads too, yet in some ways, the fundamental principles of safety remain the same. From his perspective of managing safety in different industries, from the police force, transport, logistics and warehouse safety, he says: “Safety is the same, the principles of occupational and operational safety are the same, so whether you are applying it in one organisation or another, the principles are the same.”

By Shaun Doak, REACT Specialist Cleaning on 02 May 2021

A thorough cleaning regime is vital to reduce the spread of Covid-19 as businesses begin to reopen.