In their book, Varieties of Capitalism, edited by political economists Peter Hall and David Soskice, two broad types of capitalist economies are identified: the liberal, free market version that we see in the US and UK, and what they call coordinated market economies we see in many parts of Europe.

In general terms, the former are identified with flexible labour markets and a more individualistic approach to rights and responsibilities, while the latter are more associated with cooperation and collaboration.

This approach serves a useful way to think about how we, as a society, deal with work-related injury and ill health; about how the costs of failure are paid for and the institutional framework that underpins the allocation of these costs. It may also say a lot about these countries different values, for example the relative importance of individual risk taking. I’ll come back to that.

February’s edition of Safety Management includes fascinating research by my colleague Chris Warburton into how the costs of health and safety failure are picked up in the UK by the three social actors: employer, individual and state (though its healthcare services). The approach to who pays for injury and ill-health costs is very much in keeping with liberal, free market tenets, where a significant amount of the cost of failure is picked up by the individual and state healthcare.

For Germany – where the market economy is more coordinated – we see a different approach. If injury and ill-health happens (both at work and going to or leaving work) then compensation, medical costs, recovery and costs of ‘integration’ (including re-training if necessary) are covered by employers who pay into an insurance scheme. Employees do not pay for this insurance. For public sector workers, the state pays.

Germany’s statutory occupational accident insurance is among the oldest branches of German social insurance, going back to the birth of modern Germany in 1871. In total, some 70 million people are now insured, including 17.3 million children and students, financed by some 3m businesses, 450,000 public institutions and 120,000 schools.

Many people argue that the UK should follow such an approach and avoid the ‘moral hazard’ problem where UK employers who create the risk (and as dutyholders, this is enshrined in HSWA) do not pay enough of the costs of failure. This absence of statutory insurance also, some argue, creates a private insurance industry that drives a compensation culture. It’s true we don’t see in Germany the kind ‘elf and safety’ idiocy that does so much to harm the importance of risk management.

I am sympathetic to this argument. However, I can also see that our particular variety of health and safety emerges from our variety capitalism where there is more emphasis on the value of individual responsibility. This more atomised individualism is about rewarding risk taking and punishing failure. So if someone hurts themselves at work, as long as the employer has fulfilled his or her statutory obligations, then the presupposition is that the individual should bear some of the cost of failure.

We can see this more ‘separate’ relationship in the UK between the individual and the state in every corner of life; from education (where those who benefit from university education are expected to pay for it) to our adversarial politics where tribal loyalties still persist and coalitions are treated with suspicion. So, as much as I would like to see Germany’s insurance system adopted here, translating systems in this way is not just a technical exercise of rule making and institutional capacity building.

However, it is also true that the values embedded in the liberal free market variety of capitalism are also not eternal and ‘natural.’ The UK does have an NHS where we all contribute, where trade unions and employee representatives still play important roles. So perhaps, ultimately, a fairer and more cooperative approach to financing the wrongs of poor risk management can still be achieved. 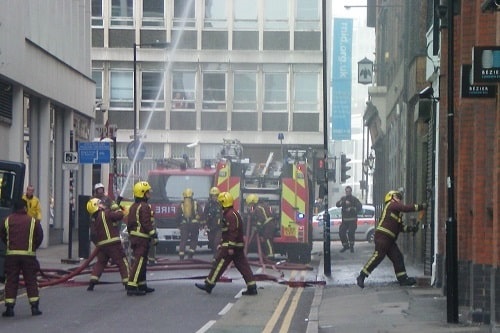 By Lawrence Waterman on 29 November 2019

One of the common experiences of older safety practitioners is the frustrating sense of déjà vu when reading accident investigation reports.